General Bruce Keener Holloway (September 1, 1912 – September 30, 1999) was an American Air Force general. A West Point graduate, he was a World War II fighter ace and later the commander in chief of the Strategic Air Command (SAC).

From Knoxville, Tennessee, he was one of two children of Frank P. Holloway, a mill owner, and Elizabeth Keener, a homemaker. He graduated from Knoxville High School in 1929 and studied engineering for two years at the University of Tennessee before attending Marion Military Institute, where he prepared for appointment to the United States Military Academy, where he graduated in 1937. Assigned to the Army Air Corps, he received his pilot wings in 1938 at Kelly Field, San Antonio, Texas, then served two years with the Sixth Pursuit Squadron and 18th Pursuit Group in Hawaii before taking a postgraduate course in aeronautical engineering at the California Institute of Technology.[1][2] 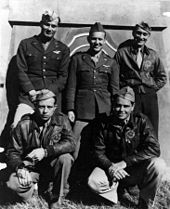 After The US enter World War II Holloway was sent to China to observer Chennault's American Volunteer Group (AVG), the Flying Tigers. He became the commander of the 23rd Fighter Group U.S. Army Air Forces. During his tour in China, Holloway earned status as a fighter ace, shooting down 13 Japanese planes.[3] He returned to the U.S. in 1944.

After graduation from the National War College in 1951, he progressed through key staff assignments in both operations and development fields at Headquarters U.S. Air Force. Later, as director of operational requirements, he played a key role in preparing and evaluating proposals for many aircraft and missiles.

General Holloway assumed command of the U.S. Air Forces in Europe in July 1965, serving in that capacity until his appointment as vice chief of staff of the U.S. Air Force August 1, 1966 at the Pentagon. He became commander-in-chief of the Strategic Air Command at Offutt AFB, Nebraska, on August 1, 1968, and remained in that position until his retirement from the Air Force in 1972.

Holloway retired from the USAF on April 30, 1972, and died of heart failure at age 87 in Orlando, Florida, on September 30, 1999.
His remains were cremated and interred in his hometown of Knoxville, Tennessee.

Legion of Honor - Order of Commander