Flat Stanley is a 1964 children's book written by Jeff Brown (January 1, 1926 – December 3, 2003) and originally illustrated by Tomi Ungerer. It is the first in a series of books featuring Stanley Lambchop.

Stanley Lambchop and his younger brother Arthur are given a big bulletin board by their father to display pictures and posters. He hangs it on the wall over Stanley's bed. During the night the board falls from the wall, flattening Stanley in his sleep. He survives and makes the best of his altered state, and soon he is entering locked rooms by sliding under the door, and playing with his younger brother by being used as a kite. One special advantage is that Flat Stanley can now visit his friends by being mailed in an envelope. Stanley even helps catch some art museum thieves by posing as a painting on the wall. Eventually, Stanley is tired of being flat and Arthur changes him back to his proper shape with a bicycle pump.

Other books in the series[edit source | edit]

At the time of his death, Brown was working on another Flat Stanley book[citation needed]. Further books in the series have since been written by other authors.

In addition, a series called Flat Stanley's Worldwide Adventures is being written by other authors, with nine books out so far: 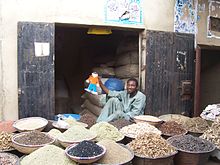 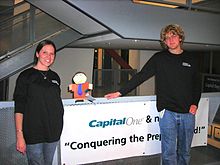 A Flat Stanley mailed to Richmond, Virginia, sent as a visitor as part of the Flat Stanley project from a student in Atlanta, Georgia

The Project provides an opportunity for students to make connections with students of other member schools who have signed up with the project. Students begin by reading the book and becoming acquainted with the story. They create paper "Flat Stanleys" (representative drawings of the Stanley Lambchop character) and keep a journal for a few days, documenting the places and activities in which Flat Stanley is involved. Each student's Flat Stanley and its respective journal are mailed to other people who are asked to treat the figure as a visiting guest and add to his journal, then return them both after a period of time. The project has many similarities to the travelling gnome prank except, of course, for the Flat Stanley Project's focus on literacy. 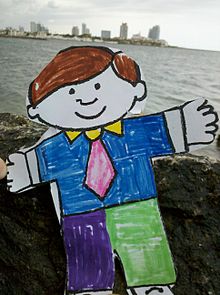 Students may find it fun to plot Flat Stanley's travels on maps and share the contents of the journal. Often, a Flat Stanley returns with a photo or postcard from his visit. Some teachers prefer to use e-mail for its quicker travel time.

In 2005, more than 6,500 classes from 48 countries took part in the Flat Stanley Project.[citation needed]

The project was featured in a 2004 episode of the animated TV series King of the Hill, in which Nancy Gribble receives a Flat Stanley in the mail. Peggy Hill and Luanne Platter photograph it in a number of dangerous situations, resulting in the school's Flat Stanley Project being cancelled.

According to the February 26, 2009 broadcast of Countdown with Keith Olbermann, Flat Stanley was on board US Airways Flight 1549 which landed safely in the Hudson River. He was carried to safety in the briefcase of his traveling companion.

In early 2010, Darren Haas, a huge Flat Stanley advocate and applications architect, approached Dale Hubert with the idea of turning the Flat Stanley Project concept into an app for the iPhone.

Also in 2010, fans of the baseball team the St. Louis Cardinals were asked (via the team website) to petition US President Barack Obama to award the Presidential Medal of Freedom to Baseball Hall of Famer Stan Musial. A "Flat Stan" downloadable cutout figure was made available to encourage Cardinals fans to take a photo with Musial's caricature and send them in as petitions.

How it works[edit source | edit]

In the Flat Stanley children's books, Stanley travels the world in envelopes. Students who read the books send the paper doll and written notes to students in other parts of the world through conventional mail and e-mail. Children exchange ideas, photographs, questions and culture with students overseas.[1]

Teachers register and arrange exchanges with other classrooms on the Flat Stanley Project website. Other teachers ask students get their parents' permission to address an envelope and send the paper doll to a friend or relative in another state.[2]