From Wikipedia, the free encyclopedia
Jump to: navigation, search
This article is about an air combat mission. For the G.I. Joe character, see Wild Weasel (G.I. Joe). 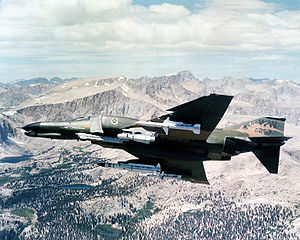 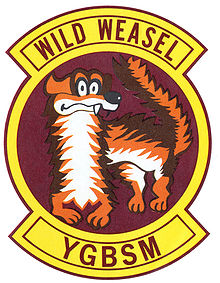 Wild Weasel is a name for aircraft, of any type, equipped with radar-seeking missiles and tasked with destroying the radars and SAM installations of enemy air defense systems.[1][2]

The Wild Weasel concept was developed by the United States Air Force in 1965, after the introduction of Soviet SAM missiles and their downing of U.S. strike aircraft over the skies of North Vietnam.[3] The program was headed by General Kenneth Dempster.

Wild Weasel tactics and techniques began their developmment in 1965 following the commencement of Operation Rolling Thunder during the Vietnam War, and were later adapted by other nations during following conflicts, as well as being integrated into the Suppression of Enemy Air Defenses (SEAD) a plan used by US air forces to establish immediate air control, prior to possible full scale conflict.[2] Initially known by the operational code "Iron Hand" when first authorized on 12 August 1965, the term "Wild Weasel" derives from Project Wild Weasel, the USAF development program for a dedicated SAM-detection and suppression aircraft. (The technique {or a specific part} was also called an "Iron Hand" mission, though technically the Iron Hand part refers only to a suppression attack that paves the way for the main strike.[4]) Originally named "Project Ferret", denoting a predatory animal that goes into its prey's den to kill it (hence: "to ferret out"), the name was changed to differentiate it from the code-name "Ferret" that had been used during World War II for radar counter-measures bombers.

In brief, the task of a Wild Weasel aircraft is to bait enemy anti-aircraft defenses into targeting it with their radars, whereupon the radar waves are traced back to their source allowing the Weasel or its teammates to precisely target it for destruction. A simple analogy is playing the game of "flashlight tag" in the dark; a flashlight is usually the only reliable means of identifying someone in order to "tag" (destroy) them, but the light immediately renders the bearer able to be identified and attacked as well. The result is a hectic game of cat-and-mouse in which the radar "flashlights" are rapidly cycled on and off in an attempt to identify and kill the target before the target is able to home in on the emitted radar "light" and destroy the site.

The Wild Weasel concept was originally proposed in 1965 as a method of countering the increasing North Vietnamese SAM threat, using volunteer crews flying the two-seat F model of the F-100 Super Sabre; while the United States Navy primarily relied upon the A-4 Skyhawk.[5][6] While an effective airframe, the F-100F Wild Weasel did not have the performance characteristics to survive in a high threat environment. The first Wild Weasel squadron was the 354th Tactical Fighter Squadron based at Takhli Royal Thai Air Base, Thailand. After 45 days of operations against North Vietnamese targets, the 354th had one airplane left and of the 16 aircrew members, four had been killed, two were POW's, three had been wounded and two had quit.

The F-105 had gone out of production by 1964. With severe combat attrition of the F-105 inventory, the need for a still more sophisticated aircraft resulted in the conversion of 36 F-4C Phantom II aircraft, designated F-4C Wild Weasel IV. The F-4C Wild Weasel IV was also not designated as an EF-4C.

The F-4E, the most advanced Phantom variant with extensive ground-attack capabilities and an internal gun, became the basis for the F-4G Wild Weasel V (also known as the Advanced Wild Weasel). This modification consisted of removing the gun and replacing it with the APR-38(t) Radar Homing and Warning Receiver (later upgraded to the APR-47), and a cockpit upgrade for the back seat to manage the electronic combat environment. A total of 134 F-4G models were converted from F-4Es with the first one flying in 1975. Squadron service began in 1978.

F-4Gs were deployed to three active wings. One was stationed at George AFB, Victorville, California. as part of the Rapid Deployment Force; one wing was assigned to USAFE (US Air Forces Europe) at Spangdahlem AB, Germany; and the other to PACAF (Pacific Air Forces) at Clark AFB, Philippines. F-4Gs from George AFB and Spangdahlem AB saw combat during Operation Desert Storm in 1991, successfully protecting strike packages from enemy air defenses. During this conflict the F-4G saw heavy use, with only a single loss: an aircraft from Spangdahlem AB crashed in Saudi Arabia while returning from a mission. After an investigation into the loss of the aircraft which occurred during several aborted landing attempts in a sandstorm, it was determined that a fuel cell was punctured by anti-aircraft fire. The pilot and EWO safely ejected after the engines seized when the aircraft ran out of fuel attempting to land at a forward airstrip.

After Desert Storm, some of the George AFB aircraft were assigned to the 124th Wing of the Air National Guard at Boise, Idaho, 190th Fighter Squadron. Aircraft from Spangdahlem, Clark, and the remainder from George were assigned to the 57th Fighter Wing (Active AF) assigned to Nellis AFB at Las Vegas, 561st Fighter Squadron. The aircraft remained in service until 1996, with both squadrons participating in frequent deployments to Saudi Arabia and Turkey in support of Operation Provide Comfort, Operation Southern Watch, and Operation Vigilant Warrior enforcing the no-fly zones over Iraq. By this time the F-4G was the last operational variant of the Phantom II in the US forces. Many of the airframes were later used as target drones and Aircraft Battle Damage Repair training aids.

A change in aircraft design theory to stress versatile multi-role aircraft meant that the F-4G was the last aircraft specifically outfitted for the SEAD role. The Wild Weasel mission is now assigned to the F-16 Fighting Falcon, using the Block 50 and Block 52, with production beginning in 1991. The single-seat Block 50/52 F-16C is specifically tasked with this mission. The pilot now performs both the role of flying the airplane and targeting and employing against ground threats. Other aircraft, such as the F-15E Strike Eagle and A-10 Thunderbolt II "Warthog", while capable of engaging mobile SAM launchers and anti-aircraft artillery (AAA) in a CAS role lack the avionics to perform a true SEAD mission.

The F-35 Lightning II is slated to gradually replace these aircraft for various air-to-ground roles, including SEAD, beginning with its introduction in 2016. Its stealth capabilities promise a significant increase in effectiveness against air-defense radars, though to maintain its lowest radar signature, its payload capacity would be limited to the internal weapons bays, reducing the number of missile site attacks per sortie. However, it can carry more or larger air to ground weapons internally than even the F-22 and is more advanced in a ground attack capacity, potentially making it the best manned aircraft for destroying sophisticated enemy air defenses.[8]

In 1966 over North Vietnam, Wild Weasel flights of four aircraft sometimes were led by a single F-105F/G two-seat aircraft (aided by its Electronic Warfare Officer (EWO) with his electronic receivers & analyzers) plus three F-105Ds. Sometimes two "F"s, each with a "D" wingman, operated independently.

The Wild Weasel mission was to precede strike flights, sanitizing the target area of radar guided Surface-to-Air Missile SA-2 'Guideline' threats, leaving the threat area last, which sometimes would result in 3.5-hour missions, before returning to Royal Thai Air Force Bases. This was achieved by turning toward the air defense site in a threatening manner, firing radar homing missiles at the site, or visually locating the site to dive bomb it. These tactics were attempted while under attack by MiGs and anti-aircraft artillery.

The F-105F did not utilize radar jamming devices since its purpose was to provide a decoy target, protecting the strike flights, and encouraging SAM launches that generated enough bright smoke to make possible seeing the SAM site for immediate dive bombing attack. With multiple incoming missiles in visual sight it was possible to dive abruptly or sharply break to avoid them. Failure to see the missiles approaching at three times fighter cruise speed would result in the destruction of the aircraft and failure of the mission.

Vietnam War tactics of utilizing "Hunter-Killer" teams,[9] where an F-4G Wild Weasel would be teamed with one or more conventional F-4E Phantoms were improved upon with the newer equipment. The Wild Weasel would destroy missile radar emitters, clearing the way for the F-4E's to destroy the rest of the missile site using cluster munitions.

A tactic used during Operation Desert Storm was known as "Here, kitty kitty", wherein one Weasel would get the attention of a SAM or anti-aircraft artillery site while other Weasels would then sneak up behind the site and destroy it.

In one of the Wild Weasel concept's most famous uses in military operations, five F-105Gs, using the call-signs "Firebird 01–05", provided support for the Son Tay P.O.W. Rescue Mission, which was conducted in the early morning hours of 21 November 1970. One of these aircraft was shot down by an SA-2 surface-to-air missile, but its crew ejected safely and was rescued by the HH-53 "Super Jolly" helicopters that also participated in the raid. None of the aircraft of the raiding force protected by Wild Weasels was lost to enemy action.

The unofficial motto of the Wild Weasel crews is YGBSM: "You Gotta Be Shittin' Me". This appears prominently on the logo patch of some squadrons. As the story goes, this was the response of Jack Donovan, a former B-52 EWO (Electronic Warfare Officer):

This was the natural response of an educated man, a veteran EWO on B-52s and the like, upon learning that he was to fly back seat to a self-absorbed fighter pilot while acting as flypaper for enemy SAMs.[10][11]

His exact words were:" You want me to fly in the back of a little tiny fighter aircraft with a crazy fighter pilot who thinks he's invincible, home in on a SAM site in North Vietnam, and shoot it before it shoots me, you gotta be shittin' me!"

"The first Wild Weasel success came soon after (the first Wild Weasel mission 20 December 1965 where both air crewmen were either captured or killed), when Captains Al Lamb and Jack Donovan took out a site during a Rolling Thunder strike on the railyard at Yen Bai, some 75 miles northwest of Hanoi."[12]