From Wikipedia, the free encyclopedia
Jump to: navigation, search
For other uses, see V Day (disambiguation). 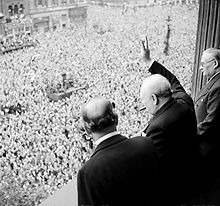 Winston Churchill waves to crowds in Whitehall, London on the day he broadcast to the nation the war with Germany was over.

Crowds gathered in celebration at Piccadilly Circus during VE Day, 1945.

The instrument of surrender signed at Reims on 7 May 1945.

Final positions of the Allied armies, May 1945. 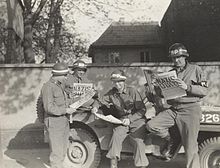 US MP's reading about German surrender in Stars and Stripes

Victory in Europe Day—known as V-E Day or VE Day—was the public holiday celebrated on 8 May 1945 (in Commonwealth countries, 7 May 1945) to mark the date when the World War II Allies formally accepted the unconditional surrender of the armed forces of Nazi Germany and the end of Adolf Hitler's Third Reich, thus ending the war in Europe. The formal surrender of the occupying German forces in the Channel Islands was not until 9 May 1945. On 30 April Hitler committed suicide during the Battle of Berlin, and so the surrender of Germany was authorized by his successor, President of Germany Karl Dönitz. The administration headed by Dönitz was known as the Flensburg government. The act of military surrender was signed on 7 May in Reims, France, and on 8 May in Berlin, Germany.

Upon the defeat of Germany (Italy having already surrendered), celebrations erupted throughout the Western world. From Moscow to New York, people cheered. In the United Kingdom, more than one million people celebrated in the streets to mark the end of the European part of the war. In London, crowds massed in Trafalgar Square and up The Mall to Buckingham Palace, where King George VI and Queen Elizabeth, accompanied by Prime Minister Winston Churchill, appeared on the balcony of the Palace before the cheering crowds. Princess Elizabeth (the future Queen Elizabeth II) and her sister Princess Margaret were allowed to wander incognito among the crowds and take part in the celebrations.[1]

In the United States, the victory happened on President Harry Truman's 61st birthday.[2] He dedicated the victory to the memory of his predecessor, Franklin D. Roosevelt, who had died of a cerebral hemorrhage less than a month earlier, on 12 April.[3] Flags remained at half-staff for the remainder of the 30-day mourning period.[4][5] Truman said of dedicating the victory to Roosevelt's memory and keeping the flags at half-staff that his only wish was "that Franklin D. Roosevelt had lived to witness this day."[3] Later that day, Truman said that the victory made it his most enjoyable birthday.[2]

As the Soviet representative in Reims had no authority to sign the German instrument of surrender, the Soviet leadership proposed to consider Reims surrender as a "preliminary" act. The surrender ceremony was repeated in Berlin on May 8, where the instrument of surrender was signed by supreme German military commander Wilhelm Keitel, by Georgy Zhukov and Allied representatives. Since the Soviet Union was to the east of Germany, it was May 9 Moscow Time when the German military surrender became effective, which is why Russia and most of the former Soviet republics commemorate Victory Day on 9 May instead of 8 May.

(May 8 unless otherwise stated)