Ivy Mike was the codename given to the first test of a thermonuclear device in which part of the explosive yield came from nuclear fusion. It was detonated on November 1, 1952 by the United States on Enewetak, an atoll in the Pacific Ocean, as part of Operation Ivy. The device was the first full test of the Teller-Ulam design, a staged fusion bomb, and was the first successful test of a hydrogen bomb.

Due to its physical size and fusion fuel type (cryogenic liquid deuterium), the Mike device was not suitable for use as a weapon; it was intended as an extremely conservative experiment to validate the concepts used for multi-megaton detonations. A simplified and lightened bomb version (the EC-16) was prepared, and scheduled to be tested in operation Castle Yankee, as a backup in case the non-cryogenic "Shrimp" fusion device (tested in Castle Bravo) failed to work; that test was cancelled when the Bravo device was tested successfully, making the cryogenic designs obsolete. 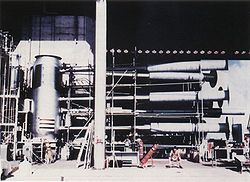 A view of the Sausage device casing, with its instrumentation and cryogenic equipment attached. The long pipes were for observation and measurement purposes and would receive the first bits of radiation from the primary and secondary ("Teller light") just as the device was detonated. Note man seated lower right for scale.

The 62-ton "Mike" device was essentially a building that resembled a factory rather than a weapon. It has been reported that Soviet engineers derisively referred to Mike as a "thermonuclear installation".[1] At its center, a very large cylindrical thermos flask or cryostat, held the cryogenic deuterium fusion fuel. A regular fission bomb (the "primary") at one end was used to create the conditions needed to initiate the fusion reaction.

The device was designed by Richard Garwin, a student of Enrico Fermi, on the suggestion of Edward Teller. It had been decided that nothing other than a full-scale test would validate the idea of the Teller-Ulam design, and Garwin was instructed to use very conservative estimates when designing the test, and that it need not be small and light enough to be deployed by air.[2]

The primary stage was a TX-5 boosted fission bomb in a separate space atop the assembly (so it would not freeze, rendering it inoperable). The "secondary" fusion stage used liquid deuterium despite the difficulty of handling this material, because this fuel simplified the experiment, and made the results easier to analyze. Running down the center of the flask which held it, was a cylindrical rod of plutonium (the "sparkplug") to ignite the fusion reaction. Surrounding this assembly was a five-ton (4.5 tonne) natural uranium "tamper". The exterior of the tamper was lined with sheets of lead and polyethylene, which formed a radiation channel to conduct X-rays from the primary to secondary. (The function of the X-rays was to hydrodynamically compress the secondary, increasing the density and temperature of the deuterium to the level needed to sustain a thermonuclear reaction, and compress the sparkplug to supercriticality ignition.) The outermost layer was a steel casing 10–12 inches (25–30 cm) thick. The entire assembly, nicknamed "Sausage", measured 80 inches (2.03 m) in diameter and 244 inches (6.19 m) in height and weighed about 54 tons.

The entire Mike device (including cryogenic equipment) weighed 82 short tons (73.8 metric tonnes), and was housed in a large corrugated-aluminium building called a "shot cab" which was set up on the Pacific island of Elugelab, part of the Enewetak atoll.

A 9,000-foot (2.7 km) artificial causeway connected the islands of Elugelab, Teiter, Bogairikk, and Bogon. Atop this causeway was an aluminium-sheathed plywood tube (named a "Krause-Ogle box") filled with helium ballonets. This allowed gamma and neutron radiation to pass uninhibited to an unmanned detection station housed in a bunker on Bogon.

In total, 9,350 military and 2,300 civilian personnel were involved in the Mike shot. A large cryogenics plant was installed on Parry Island, at the South end of the Eniwetak atoll, to produce the liquid hydrogen (used for cooling the device) and deuterium needed for the test. 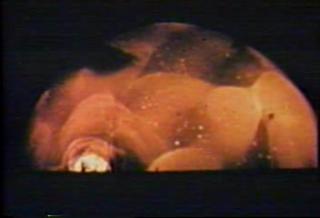 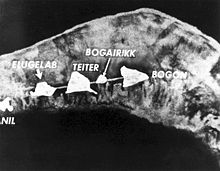 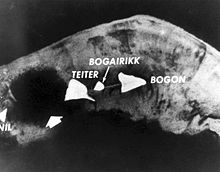 The test was carried out at 07:15 A.M local time on November 1, 1952 (19:15 October 31 GMT). It produced a yield estimated in the range of 10.4–12 megatons of TNT. However, 77% of the final yield came from fast fission of the uranium tamper, which meant that the device produced large amounts of fallout.

The blast created a crater 6,240 feet (1.9 km) in diameter and 164 feet (50 m) deep where Elugelab had once been;[3] the blast and water waves from the explosion (some waves up to twenty feet high) stripped the test islands clean of vegetation, as observed by a helicopter survey within 60 minutes after the test, by which time the mushroom cloud and steam were blown away. Radioactive coral debris fell upon ships positioned 35 miles (48 km) from the blast, and the immediate area around the atoll was heavily contaminated for some time. Produced by intensely concentrated neutron flux about the detonation site were two new elements, einsteinium and fermium.[4]

The entire shot was documented by the filmmakers of Lookout Mountain studios. The film was accompanied by powerful, Wagner-esque music featured on many test films of that period and was hosted by actor Reed Hadley. After the test, a private screening was given to President Dwight D. Eisenhower. It was later released to the public after censoring, and was shown on commercial television channels.

Edward Teller, perhaps the most ardent supporter of the development of the hydrogen bomb, was in Berkeley, California at the time of the shot. He was able to receive first notice that the test was successful by observing a seismometer, which picked up the shock wave that traveled through the earth from the Western Pacific test site.[5] In his memoirs, Teller wrote that he immediately sent an unclassified telegram to his colleagues at Los Alamos which, for security purposes, contained only the words "It's a boy."[6]