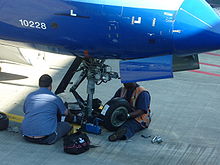 Aircraft maintenance technician, as used in the United States, refers to an individual who holds a mechanic certificate issued by the Federal Aviation Administration; the rules for certification, and for certificate-holders, are detailed in Subpart D of Part 65 of the Federal Aviation Regulations (FAR's), which are part of Title 14 of the Code of Federal Regulations.[1] Aircraft Maintenance Technicians (AMT's) inspect and perform or supervise maintenance, preventive maintenance, and alteration of aircraft and aircraft systems. In the US, aircraft maintenance technicians usually refer to themselves as A&Ps, for airframe and powerplant mechanics.

The Canadian, Australian and New Zealand equivalent of an AMT is an aircraft maintenance engineer.

The general requirements for eligibility for a mechanic certificate include the following:

The required tests include, first, a set of knowledge tests; these are followed by a practical test, which includes an oral examination component, and which is administered by a Designated Mechanic Examiner (DME).

A person who fulfills the necessary requirements is issued a mechanic certificate with either an airframe or powerplant rating, or both.[3] It is these ratings which together account for the common practice of referring to mechanics as "A&P's." Until 1952, instead of the Powerplant rating, an Engine rating was issued, so the abbreviation "A&E" may appear in older documents.[3]

Eligibility for the mechanic tests depends on the applicant's ability to document their knowledge of required subject matter and ability to perform maintenance tasks.[4][5] The FAA recognizes two ways of demonstrating the needed knowledge and skills: Practical experience or completion of a training program at a school certificated under Part 147 of the FAR's.[6]

The Professional Aviation Maintenance Association and SAE Institute provide a number of certifications for aircraft mechanics.

The AMTSociety presents the Maintenance Skills Competition annually, which recognizes top AMT teams across all aviation including commercial and military.

Applications based on experience[edit source | edit]

Applicants for a Mechanic certificate with a single rating—either airframe or powerplant—and who base their application on practical experience must demonstrate 18 months of work experience applicable to the chosen rating. Those applying for both ratings must show a total of 30 months of applicable experience.[6] Many military-trained aircraft mechanics are eligible to use their work experience as the basis for an application for a civilian mechanic certificate.[7]

Applications based on education[edit source | edit]

Applicants who attend an Aviation Maintenance School program certificated under Part 147 study an FAA-approved and supervised curriculum. Those applying for a Mechanic certificate with a single rating—either Airframe or Powerplant—study a "general" set of subjects for at least 400 hours, as well as at least 750 hours of material appropriate to the chosen rating, for a total of 1,150 hours. Those who pursue both ratings study the "general" material, as well as the 750 hours for each rating, for a total of at least 1,900 hours.[8] Completion of such a program of study typically requires between 18 and 24 months.

Some AMTs, after at least three years of working in their field, choose to acquire an Inspection authorization, which is an additional rating added on to the individual's mechanic certificate. These individuals are allowed to perform annual inspections on aircraft and sign off for return to service on major repairs and alterations on the required block of the FAA form 337. Certification and limitations, including renewal requirements, of mechanics with Inspection Authorization is contained in 14 CFR Part 65.

The requirements for obtaining an Inspection authorization is that the AMT must be licensed for a minimum of three years and actively exercising the rights of an A&P for the two years prior to the date that the IA examination is to be taken.

Renewal of the IA rating must be done every two years (on odd years) by submitting to the FAA a form showing a minimum of activity in which the IA exercised his or her authority. This activity comprises either annual inspections, major repairs, major alterations, or a minimum of 8 hours of FAA approved training. This activity must be accomplished every 12 months even though the renewal period is every 24 months.

AMC Part 66 is based on Joint Aviation Regulations (JAR) promulgated by the Joint Aviation Authorities and on Air Transport Association (ATA) Specification 104. There are four levels of authorization: