The United States Air Force's 6th Air Mobility Wing (6 AMW) is the host wing for MacDill Air Force Base, Florida. It is part of Air Mobility Command's (AMC) Eighteenth Air Force. The wing's 6th Operations Group is a successor organization of the 3d Observation Group, one of the seven original combat air groups formed by the United States Army Air Service shortly after the end of World War I.[1]

The 6th Air Mobility Wing provides day-to-day mission support to more than 3,000 personnel along with more than 50 mission partners, including the United States Central Command and United States Special Operations Command. It is a force capable of rapidly projecting air refueling power anywhere in the world. The Wing is organized into four unique groups and three operational flying squadrons to carry out its mission to be provide air refueling, airlift, and airbase support.

The Wing's emblem, approved for the 6th Composite Group in 1924,[1] reflects its origins with a ship sailing through the Gaillard Cut and an airplane flying overhead. 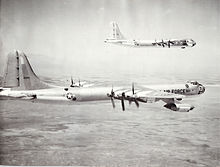 The 6th Bombardment Wing (Medium) was activated Walker Air Force Base, New Mexico on 2 January 1951, attached to the Eighth Air Force. The unit consisted of the 24th, 39th and 40th Bombardment Squadrons and was initially equipped with Boeing B-29 Superfortress aircraft. The 307th Air Refueling Squadron was also attached until 1952 and operated KB-29P Superfortress Tankers.

The wing has through temporary bestowal the lineage and honors of one of the oldest groups in the Air Force, its subordinate 6th Operations Group which was originally activated as the 3d Observation Group in the Panama Canal Zone on 30 September 1919.[1] One of its assigned squadrons had been activated two years earlier during World War I and had been commanded by (then) Capt. Henry H. Arnold. During World War II, the 6th Bombardment Group was assigned to the Twentieth Air Force and earned two Distinguished Unit Citations for action against Tokyo and the Japanese Empire.[1]

One year after activation, the Sixth converted from the B-29 to the Convair B-36 Peacemaker. On 1 April 1955, the 6th Bombardment Wing was from Eighth Air Force to Fifteenth Air Force. At Walker, the wing was bestowed the history and honors of the USAAF 6th Bombardment Group in 1952. Operations consisted of strategic bombardment training with air refueling as additional mission in 1951–1952, and again from April 1958. The Boeing B-52E Stratofortress replaced the wing's B-36 in September 1957.

In September 1959, the 24th and 30th Bombardment Squadrons joined the newly assigned 4129th Combat Crew Training Squadron to train B-52 and KC-135 crews. Early in 1965, a second KC-135 squadron was transferred to Walker when Schilling Air Force Base, Kansas, began its inactivation process. This made the Sixth a double-sized wing and one of the largest in SAC with its 60 heavy jet aircraft.

As the Soviet missile threat increased, so did the 6th's mission. The 579th Strategic Missile Squadron (SMS)was activated in 1962 as an SM-65 Atlas-F squadron. This addition of ICBMs resulted in the wing's re-designation as the 6th Strategic Aerospace Wing. After its reactivation, the squadron received its first ICBM on 24 January 1962 and became fully operational during the Cuban Missile Crisis of October–November, 1962. However, bad luck dogged its footsteps and three of the 12 sites were lost by explosions on 1 June 1963, 13 February 1964, and 9 March 1964.

On 18 November 1964, it was announced that liquid-fueled Atlas-F missiles would be phased out three years early due to the increased reliability of the solid-fueled LGM-30A Minuteman I ICBM. Accordingly, the 579th Strategic Missile Squadron (SMS) inactivated 25 March 1965. Soon after the base was apprised by a second announcement on 8 December 1965 that it was scheduled to close as an active installation.

With the announcement of Walker's closure, the 310th Air Refueling Squadron (AREFS) moved to Plattsburgh Air Force Base, New York on 25 January 1967. The 6th Air Refueling Squadron was inactivated at the same time, and its resources were apportioned out to SAC organizations in need of them. The 6th Strategic Aerospace Wing bomb squadrons also inactivated on 25 March 1967 and their resources were apportioned.

The inactivation never happened as the 6th transferred to Eielson AFB, Alaska, without equipment and personnel on 25 March 1967, to become the 6th Strategic Wing.

Notable events during the 6th SAW/SW tenure were: 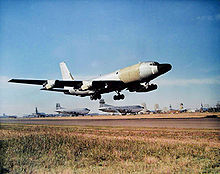 Emblem of the 4157th Strategic Wing

The wing moved to Eielson Air Force Base, Alaska, where it became the 6th Strategic Wing (SW). The wing was assigned the 24th Strategic Reconnaissance Squadron, which carried the same number as one of its previous bombardment squadrons. The 6th had gone full circle and was back in reconnaissance as its predecessor had been in 1919, only with RC-135 jet aircraft.

At Eielson, the wing assumed the personnel, equipment, and mission of the 4157th Strategic Wing. SAC had formed this unit as the 4157th Combat Support Group on 1 July 1960[2] to provide support for forward deployed SAC bombardment and reconnaissance elements at Eielson. The group was a tenant of the 5010th Air Base Wing (later 5010th Combat Support Group) of Alaskan Air Command.[2] Its original component squadron was the 14th Aviation Depot Squadron (later the 14th Munitions Maintenance Squadron), which had been at Eielson since 1956 was assigned to oversee the group's special weapons. When the focus of the 4157th shifted to reconnaissance, the 14th was inactivated in 1962.[2] The wing mission expanded to include air refueling support for B-52s involved with Chrome Dome operations[3]

In November 1963, the group was upgraded to wing status as the 4157th Strategic Wing. The 4157th gained an additional unit in 1965 when the 4157th Consolidated Aircraft Maintenance Squadron was assigned to provide maintenance support for deployed aircraft.[2] However, SAC Major Command Controlled (MAJCON) Strategic Wings could not carry a permanent history or lineage[4] and SAC took the opportunity presented by the drawdown at Walker to replace the 4157th with the Sixth.[2][5]

The 6th Strategic Wing also maintained a detachment at Shemya AFB, Alaska, in addition to maintaining the Alaskan Tanker Task Force to support strategic reconnaissance and the NORAD Alaskan ballistic missile early warning station. On 1 April 1988, SAC renamed the wing the 6th Strategic Reconnaissance Wing. During this time it flew the RC–135S and TC-135.

The Wing won the P.T. Cullen Award for greatest contributions to the photo and signal intelligence efforts of Strategic Air Command, 1973, 1978, and 1983.

The 24th Strategic Reconnaissance Squadron left Eielson AFB on 7 July 1992. The wing lost its operational mission and was inactivated on 1 September 1992. The mission of the 6th SRW, and its assigned aircraft, was transferred to the 55th Wing at Offutt AFB, Nebraska.

Announcement of the 6th's most recent inactivation came in December 1991, as the reconnaissance mission of the 6th was transferred to the 55th Wing at Offutt AFB, Nebraska, and the mission of the Alaskan Tanker Task Force was terminated.

Following the 1991 Defense Base Realignment and Closure Commission (BRAC) decision to terminate the 56th Fighter Wing's mission at MacDill AFB Florida by the end of 1993 and relocate it to Luke AFB, Arizona, the Air Mobility Command assumed responsibilities for MacDill AFB with a mission to operate the base and provide support services for USCENTCOM, USSOCOM, and the large and growing number of other tenant units, as well as to provide services for transient air units.

On 22 December 1993. the 6th was redesignated as the 6th Air Base Wing (6 ABW) and activated on 4 January 1994 at MacDill AFB Florida with a primary mission of supporting two unified commands, U.S. Special Operations Command and U.S. Central Command. On 1 October 1996, the wing returned to its flying mission with the relocation of KC-135R Stratotanker aircraft from Malmstrom AFB, Montana and was renamed the 6th Air Refueling Wing (6 ARW). The wing also assumed support responsibility for EC-135 command post aircraft supporting the USCENTCOM and USSOCOM commanders at MacDill and a CT-43 aircraft supporting the USSOUTHCOM commander in Miami. Both non-tanker aircraft types were later replaced by the C-37.

During 2007 and 2008, the 6 AMW gained an Air Force Reserve Command (AFRC) "Associate" unit when the 927th Air Refueling Wing (927 ARW) relocated to MacDill AFB from Selfridge Air National Guard Base, Michigan minus its KC-135R aircraft pursuant to BRAC action, the 927 ARW's aircraft being transferred to the Michigan Air National Guard. The 927 ARW officially established itself at MacDill on 1 May 2008, with the 6 AMW and 927 ARW sharing KC-135R aircraft and personnel. All 6 AMW KC-135 were remarked to include both AMC and AFRC insignia and 6 AMW and 927 ARW markings.[6]