NGC 891 (also known as Caldwell 23) is an edge-on unbarred spiral galaxy (actually barred) about 30 million light-years away in the constellation Andromeda. It was discovered by William Herschel on October 6, 1784. The galaxy is a member of the NGC 1023 group of galaxies in the Local Supercluster. It has an H II nucleus.[3]

The object is visible in small to moderate size telescopes as a faint elongated smear of light with a dust lane visible in larger apertures.

NGC 891 looks as we think the Milky Way would look like when viewed edge-on (some astronomers have even noted how similar look our galaxy as seen from the Southern Hemisphere and NGC 891[7]) and in fact both galaxies are considered very similar in terms of luminosity and size;[8] studies of the dynamics of its molecular hydrogen have also proven the likely presence of a central bar.[9] Despite this, recent high-resolution images of its dusty disk show unusual filamentary. These patterns are extending into the halo of the galaxy, away from its galactic disk. Scientists presume that supernova explosions caused this interstellar dust to be thrown out of the galactic disk toward the halo.[10]

It may also be possible that the light pressure from surrounding stars causes this phenomenon.[11] 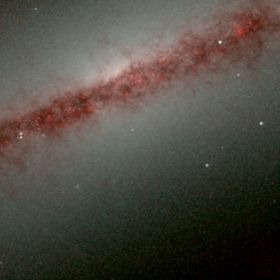 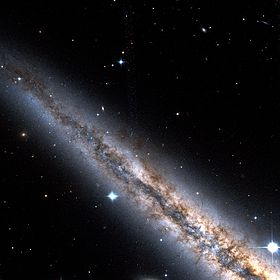 There're a number of galaxies that are easy to see from the Milky Way, but that for hypothetical observers located in NGC 891 would be invisible, at least in the optical, due to its inclination as they lie in the Zone of Avoidance of this galaxy and thus their light is blocked by NGC 891's interstellar dust. Examples of this include not only our galaxy but also the Andromeda Galaxy, that would appear so edge-on as we see NGC 891, and most notably the Virgo Cluster.[7]

The soundtrack of the 1974 film Dark Star by John Carpenter features an instrumental piece called When Twilight Falls On NGC 891.[15]