This page is also available in the Serbo-Croatian language as translated by Jovana Milutinovich at Webhostinggeeks.com.

The Cobra Judy radar is a ship-based radar program based on the US Naval Ship Observation Island [T-AGM-23]. COBRA JUDY operates from Pearl Harbor and is designed to detect, track and collect intelligence data on US. Russian, and other strategic ballistic missile tests over the Pacific Ocean

The AN/SPQ-11 shipborne phased array radar is designed to detect and track ICBM's launched by Russia in their west-to-east missile range. The Cobra Judy operates in the the 2900-3100 MHz band. The octagonal S-band array, composed of 12 288 antenna elements, forms a large octagonal structure approximately 7 m in diameter. and is integrated into a mechanically rotated steel turret. The entire system weighs about 250 tonnes, stands over forty feet high.

In 1985 Raytheon installed an 9-GHz X-band radar, using a parabolic dish antenna to complement the S-band phased array system. The five story X-band dish antenna is installed aft of the ship's funnel and forward of the phased array. The X-band upgrade was intended to improve the system's ability to collect intelligence data on the terminal phase of ballistic missile tests, since operation in X-band offers a better degree of resolution and target separation.

The S-Band and X-Band radars are used to verify treaty compliance and provide support to missile development tests by the Ballistic Missile Defense Organization. The radars are also being used for research and development work in areas not accessible to ground-based sensors.

USNS Observation Island is a converted merchant ship, modified first as a fleet ballistic missile test launch platform, then as a missile tracking platform. USNS Observation Island operates worldwide, monitoring foreign missile tests for the Air Force Intelligence command. The Military Sealift Command operates ships manned by civilian crews and under the command of a civilian master. These ships, indicated by the blue and gold bands on their stack, are "United States Naval Ships" vice "United States Ships" as is the case of commissioned ships.

U.S.S. Observation Island began her career as the SS Empire State Mariner. Her keel was laid on 15 September, 1952, at New York Shipbuilding Corporation, Camden, New Jersey. Following a short career as a Merchant Vessel she was placed in the Maritime Reserve Fleet. ON 10 September, 1956, the vessel was transferred to the Navy for use as the sea going facility for test and evaluation of the Fleet Ballistic Missile Weapons System.

The ship was commissioned as USS Observation Island (EAG-154) on December 1958. During conversion, extensive changes were made to the superstructure and holds to accommodate the installation of the first compete Fleet Ballistic Missile (FBM) Weapons System. From commissioning, until 27 August 1959, the efforts of the officers and men were directed towards the first at sea launch of Polaris Missile. The first launching of a Polaris test missile at sea was successfully conducted from the deck of the USS Observation Island about seven missiles off Cape Canaveral in September 1959. Following this milestone and the subsequent firing of other Polaris Missiles, the ship began supporting Polairs launchings from the FBM submarines; USS George Washington (SSBN 598) being the first. On 15 December 1960, Observation Island was awarded the Navy Unit Commendation for its performance during the first Polaris launches at sea. On 1 March, 1961 the ship successfully launched the new A2 Polaris Missile and on 23 October supported the first successful launch of the new A2 Polaris from an FBM Submarine, the USS Ethan Allen (SSBN 608).

During November and December 1961, Observation Island played the new role of survey ship on the Atlantic Missile Range. In January the ship returned to Norfolk Naval Shipyard for further modification in preparation for firing the new A3 Polaris and upon return to Port Canaveral in March 1962, rsumed her role as FBM submarine support ship which continued throught the summer. September and October of 1962 found Observation Island firing A2 Polaris Missiles on the Atlantic Missile Range. In late October, the ship departed for Hawaii via the Panama Canal for similar launches on the Pacific Missile Range. Meanwhile the role of submarine support was taken over by Destroyers mounting communications and telemetry equipment in portable vans. Up intil this time, every Polaris submarine had been supported by the Observation Island.

Observation Island departed Pearl Harbor in early December and arrived in Port Canaveral before Christmas. From late April until early June 1963, Obsrvation Island was expanding her role in oceanagraphic survey in ocean areas of the Atlantic Missile Range. Upon return from survey operations, on 17 June 1963, Observation Island made the first successful at sea launch of the new A3 Polaris Missile. Immediately after firing a second successful A3 Polaris on 21 June, Observation Island proceeded to Norfolk Naval Shipyard for further modifications. The ship returned to Port Canaveral in late August 1963, and supported FBM submarine launches including the first submerged launch of an A3 Polaris missile by the USS Andrew Jackson (SSBN 619) in October. On November 16, 1963, Observation Island was host ship to the late President Kennedy when he came aboard to observe a Polaris A2 launch at sea form the submerged submarine, USS Andrew Jackson. During the winter of 1963 the ship continued to support Polaris launchings from submarines as well as making several launchings from her own decks.

In March 1964 the ship departed Port Canaveral for launch and support operations in the Pacific Missile Range. In early June the ship returned to her home port, after a brief port visit in Acupulco, Mexico. The months from June to October 1964 again found the Observation Island in her familiar role as FBM submarine launching support ship, operating from Port Canaveral. On 14 October 1964 the ship departed her home port for operations in support of the Pacific Missile Range. Liberty ports during this deployment included Pearl Harbor, Hawaii and Hong Kong. The deployment ended with the arrival of the ship in Port Canaveral on 9 April 1965. The ship returned to the Norfolk Naval Shipyard in the summer of 1965 for a shipyard availability period of approximately two months. Following this overhaul period she returned to daily support operations out of Port Canaveral for FBM submarines and survey work in the Atlantic Missile Range.

The vessel was converted at Norfolk Naval Shipyard, and in reserve from September 1972. On Aug. 18, 1977, Observation Island was reacquired by the U.S. Navy from the Maritime Administration and transferred to Military Sealift Command and reclassified as T-AGM 23.

On 14 May 1999 Raytheon Support Services, Burlington, Mass., was awarded an $11,824,227 firm-fixed-price contract to provide for operation and maintenance from May 14, 1999, through May 13, 2000, of the Cobra Judy and Cobra Gemini radar systems deployed on the USNS Observation Island and the USNS Invincible, respectively. There were four firms solicited and three proposals received. Expected contract completion date is May 13, 2000. Solicitation issue date was Oct. 20, 1998. Negotiation completion date was May 13, 1999. The 668th Logistics Squadron, Kelly AFB, Texas, is the contracting activity. 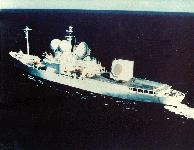 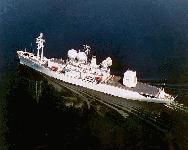 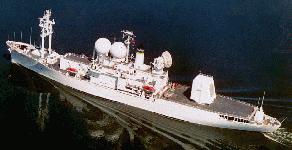 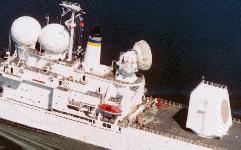 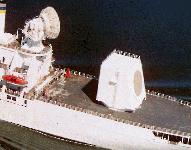