The R-36 (8K67) ballistic missile, known in the west as the SS-9 SCARP, was a a two-stage, tandem, storable liquid-propellant intercontinental ballistic missile. The missile-uses an all-inertial guidance system and according to Western estimates had a CEP of 0.4 to 0.5 nm.

The R-36 missile was derived from the experience gained during the development of the R-16 missile, and the first stage of the two missiles are very similar. The propulsion system of the first stage R-36 consisted of three open-cycle rocket engines with two combustion chambers and a four-chambered control engine. The second stage comprised a single engine with two combustion chambers. The oxidizer and fuel tanks of the second stage was the first Soviet ICBM to incorporated a common bulkhead, all propellant tanks were synchronously drained. Asymmetrical dimethylhydrazine and nitrogen tetroxide were used as propellants, and during flight gaseous combustion products were used to pressurize the fuel tanks. In order to increase accuracy the guidance system was originally planned to encompass a combination of an autonomous inertial system and radio-control. However, the deployed missile only disposed of an autonomous, inertial guidance/control system that provided the required accuracy.

The SS-9's combination of high accuracy and yield constituted a convincing threat for the American ICBMs for the first time. The SS-9 was viewed in the United States as specifically designed to attack American Minuteman ICBM Launch Control Centers (LCCs), which initially were the "Achilles heel" of the Minuteman system, as 100 LCCs controlled all 1,000 Minuteman missiles. However, by 1969, as a result of redundant internetting of Minuteman silos and a backup airborne launch control system, the LCCs no longer were the "achilles heel" of Minuteman, so building one SS-9 for each Minuteman silo required MIRVed systems.

The development of the R-36 missile in its heavy, light and orbital version began after its approval by the Soviet government on 16 April 1962. The leading developer was KB Yuzhnoye (OKB-586). The flight-design tests of the ballistic missiles (8K67) began on 28 September 1963, though the first Mod 1 flight test was not detected by Western intelligence until 03 December 1963. The flight-design tests of the R-36 missile were conducted at the Baikonur cosmodrome. The tests of the 8K67 ballistic missiles lasted from 28 September 1963 though May 1966.

The missile was placed in a silo of 41.5 meters deep with a shaft diameter of 8.3 meters and a door-diameter of 4.64 meters. Unlike the silo of the R-16U missile, the launch platform was not rotary, and the missile was directed to its trajectory (azimuthal guidance) through an onboard command structure after it left the silo. The SS-9 was deployed in individual, dispersed silos hardened to withstand 500-psi overpressure from a 1-MT weapon. The reaction time in the normal readiness condition is three to five minutes, with an unlimited hold time in that condition.

According to Western estimates, the initial operational capability for the SS-9 system, with both the Mod 1 and Mod 2 single reentry vehicle variants was reached in early 1966. According to Russian sources, the first regiment equipped with R-36 missiles was placed on alert on 05 November 1966, deployment of the 8K67 ballistic missiles began on 21 July 1967, and on 26 October 1970 deployment of the multiple-warhead variant began. Between 1965 and 1973 a total of 268 launchers for the R-36 missiles were constructed. Their replacement by the MIRVed R-36P began in 1975. The R-36 ballistic missile was phased out in 1978. The missile was ready for launch during its whole period of service that was originally fixed at five years but subsequently extended to 7.5 years. 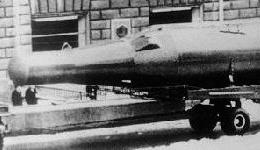