Plesetsk Cosmodrome (Russian: Космодром «Плесецк») is a Russian spaceport, located in Arkhangelsk Oblast, about 800 km north of Moscow and approximately 200 km south of Arkhangelsk. It was originally developed as an ICBM site for the R-7 missile, but was also used for numerous satellite launches using the R-7 and other rockets. Its high latitude makes it useful only for certain types of launches, especially the Molniya orbits, so for much of the site's history it was a secondary location, with most launches taking place from Baikonur. With the fall of the Soviet Union Baikonur became a foreign territory with high rental fees, so Plesetsk has seen considerably more activity since the 2000s.

Plesetsk is used especially for military satellites placed into high inclination and polar orbits since the range for falling debris is clear to the north which is largely uninhabited Arctic and polar terrain. It is situated in a region of taiga, or flat terrain with boreal pine forests.

The Soyuz rocket, Cosmos-3M, Rockot, and Tsyklon are launched from the Plesetsk Cosmodrome. The heavy Proton and Zenit rockets can only be land-launched from Baikonur (Zenit may also be launched at sea). 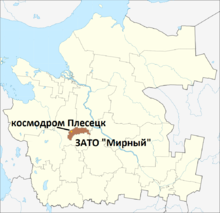 Plesetsk Cosmodrome was originally developed by the Soviet Union as a launch site for intercontinental ballistic missiles under the leadership and supervision of Lieutenant General Galaktion Alpaidze. On January 11, 1957 the Soviet Government passed the resolution about the foundation of special military object with secret name “Angara”. This secret object had to be situated in Plesetsk District, Arhangelsk Oblast. It was named after the town of Plesetsk. The first Soviet Combat formation of intercontinental ballistic missiles R-7 of General designer Koroljev had to be located in that place, in thick northern taiga to the south of Arkhangelsk. July 15, 1957, was the official birthday of the proving ground. That day Colonel Gregorjev assumed his post as the missile unit commander. By July 15, 1961, four missile complexes for ballistic missile R-7 were on combat patrol. 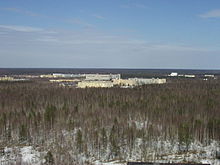 March 17, 1966, was the space birthday of Plesetsk. That day was the first missile launching of the rocket booster Vostok with space vehicle Cosmos 112. Since that time the rocket base Angara has become cosmodrome Plesetsk. Construction started in 1957 and it was declared operational for R-7 rockets in December 1959. The urban-type settlement of Plesetsk in Arkhangelsk Oblast had a railway station, essential for the transport of missile components. A new town for the support of the facility was named Mirny, Russian for "peaceful". By 1997, more than 1,500 launches to space had been made from the site, more than for any other launch facility, although the usage has declined significantly since the breakup of the Soviet Union.

The use of the cosmodrome will likely increase in the future since there are concerns with security in operating the Baikonur Cosmodrome in now-independent Kazakhstan, which also demands rent for its continued use. Plesetsk is not ideally suited for low inclination or geostationary launches because of its high latitude of 62 degrees north (as compared to the Guiana Space Centre at 5° north or the Kennedy Space Center at around 28° north).

Still, the new all-Russian Angara rocket is designed to be launched primarily from Plesetsk when it comes into service.

The Iranian satellite Sina 1 was launched from Plesetsk Cosmodrome on 27 October 2005.[1]

In May 2007, a new ICBM, called the RS-24 has been tested and launched there, and is seen as eventually replacing the aging RS-18s and RS-20s that are the backbone of Russia's missile forces. Those missiles are known in the West as the SS-19 Stiletto and the SS-18 Satan.[2]

On September 2011 Space Forces spokesman Colonel Alexei Zolotukhin said Russia will spend over 5 billion rubles ($170m) on the development and expansion of the cosmodrome in 2011. This includes the reconstruction of a local motorway, the construction of a new barracks and a cafeteria. The center's energy supply system will also be modernized. New facilities will be built, including a dormitory, a medical centre, parking lots, a hospital, and healthcare facilities.[3]