From Wikipedia, the free encyclopedia
(Redirected from First Lightning)
Jump to: navigation, search

The RDS-1 (Russian: РДС-1), also known as Izdeliye 501 (article 501) and First Lightning (Первая молния, Pervaya molniya), was used in the Soviet Union's first nuclear weapon test, the United States assigned it the code-name Joe-1, in reference to Joseph Stalin. It was exploded on 29 August 1949 at 7 in the morning,[1] at Semipalatinsk, Kazakh SSR, after a top-secret R&D project.[2] The weapon was designed at the Kurchatov Institute—at the time officially known as "Laboratory № 2," but designated as the "office" or "base" in internal documents—starting in April 1946. A uranium-235 plant was built near Chelyabinsk in 1948.[2]

The RDS-1 explosion yielded 22 kilotons of TNT, similar to the American Gadget and Fat Man bombs. At Lavrenty Beria's insistence, the RDS-1 bomb was designed as an implosion weapon similar to the Fat Man bomb dropped on Nagasaki, Japan; RDS-1 also had a solid plutonium core. The bomb designers had developed a more sophisticated design (tested later as RDS-2), but rejected it due to the known reliability of the Fat Man type design; the USSR having received extensive intelligence on the design of the "Fat Man" bomb during World War II.

In order to test the effects of the new weapon, workers constructed houses made of wood and bricks, along with a bridge, and a simulated metro in the vicinity of the test site. Armoured hardware and approximately 50 aircraft were also brought to the testing grounds, as well as over 1,500 animals to test the bomb's effects on life.[2] The resulting data showed the RDS explosion to be 50% more destructive than originally estimated by its engineers.[2]

Mikhail Pervukhin served as the chairman of the commission in charge of the RDS-1 testing. 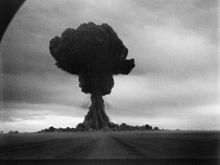 The mushroom cloud from the "First lightning" test (1949).

Response in the West[edit source | edit]

When the radioactive fission products from the test were detected by the US Air Force, the US began to follow the trail of the nuclear fallout debris.[3] President Truman notified the world of the situation on September 23, 1949: "We have evidence that within recent weeks an atomic explosion occurred in the U.S.S.R."[4] This statement was a turning point in the Cold War that had just begun. The Green Run was a secret test carried out to help the US Air Force's reconnaissance for future detections of Soviet atomic tests.[5]

Once the Soviet Union was confirmed to be in possession of the atomic bomb, pressure mounted to develop the first hydrogen bomb.[4]