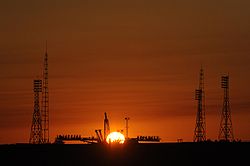 Map showing the location of Baikonur Cosmodrome in Kazakhstan.

The Baikonur Cosmodrome (Russian: космодром «Байконур»; Kazakh: Байқоңыр ғарыш айлағы), also called Tyuratam,[1] is the world's first and largest operational space launch facility. It is located in the desert steppe of Kazakhstan, about 200 kilometres (124 mi) east of the Aral Sea, north of the Syr Darya river, near Tyuratam railway station, at 90 meters above sea level. It is leased by the Kazakh government to Russia (currently until 2050) and is managed jointly by the Russian Federal Space Agency and the Russian Space Forces. The shape of the area leased is an ellipse, measuring 90 kilometres (56 mi) east-west by 85 kilometres (53 mi) north-south, with the cosmodrome at the centre. It was originally built by the Soviet Union in the late 1950s as the base of operations for its space program. Under the current Russian space program Baikonur remains a busy space port, with numerous commercial, military and scientific missions being launched annually.[2][3] Currently, all manned Russian spaceflights are launched from Baikonur.[4]

Both Vostok 1, the first manned spacecraft in human history, and before it Sputnik 1, the world's first orbital spaceflight of any sort, were launched from one of Baikonur's launch pads, which is presently known as Gagarin's Start.

U-2 Photograph of R-7 Launch Pad in Tyura-Tam.

The Soviet government issued the decree about Scientific-Research Test Range No. 5 (NIIP-5; Russian: Nauchno-Issledovatel’skii Ispytatel’nyi Poligon N.5) on 12 February 1955. It was actually founded on 2 June 1955, originally a test center for the world's first intercontinental ballistic missile (ICBM),[5] the R-7 Semyorka. NIIP-5 was soon expanded to include launch facilities for space flights. The site was selected by a commission led by Gen. Vasily Voznyuk, influenced by Sergey Korolyov, the Chief Designer of the R-7 ICBM, and soon the man behind the Soviet space program. It had to be surrounded by plains, as the radio control system of the rocket required (at the time) receiving uninterrupted signals from ground stations hundreds of kilometres away.[6] Additionally, the missile trajectory had to be away from populated areas. Also, it is an advantage to place a space launch site closer to the equator, as the surface of the earth has higher rotational speed there. Taking these constraints into consideration, the commission chose Tyuratam, a village in the heart of the Kazakh Steppe. The expense of constructing the launch facilities and the several hundred kilometres of new road and train lines made the Cosmodrome one of the most costly infrastructure projects the Soviets undertook. A supporting town was built around the facility to provide housing, schools and support infrastructure for workers. It was raised to city status in 1966 and named Leninsk (presently Baikonur).

The American U-2 high-altitude reconnaissance plane found and photographed the Tyuratam missile test range for the first time on 5 August 1957.

There are conflicting sources about origins of the name "Baikonur". Some sources say that it was not until 1961 (i.e. until Gagarin's flight), when the name "Baikonur" was deliberately chosen to misdirect[6][7] the West to a place about 320 kilometres (199 mi) northeast of the launch center, a small mining town Baikonur near Jezkazgan.

Other sources state that "Baikonur" was a name of the Tyuratam region even before the cosmodrome existed.[7] The main cosmodrome-supporting town Leninsk was renamed to Baikonur on 20 December 1995 by Boris Yeltsin.

Russian scientist Afanasiy Ilich Tobonov researched mass animal deaths in the 1990s and concluded that the mass deaths of birds and wildlife in the Sakha Republic were noted only along the flight paths of space rockets launched from the Baikonur cosmodrome.[8] Dead wildlife and livestock were usually incinerated, and the participants in these incinerations, including Tobonov, his brothers and inhabitants of his native village of Eliptyan Horulinskogo naslega commonly died from stroke or cancer. In 1997, the Ministry of Defense of the Russian Federation changed the flight path and removed the ejected rocket stages near Nyurbinsky District, Russia.

Many historic flights lifted off from Baikonur: the first operational ICBM; the first man-made satellite, Sputnik 1, on 4 October 1957; the first spacecraft to travel close to the Moon, Luna 1, on 2 January 1959; the first manned orbital flight by Yuri Gagarin on 12 April 1961; and the flight of the first woman in space, Valentina Tereshkova, in 1963. 14 cosmonauts of 13 other nations, such as Czechoslovakia, East Germany, India and France, started their historic journeys from here as well under the Interkosmos program. In 1960, a prototype R-16 ICBM exploded before launch, killing over 100 people. 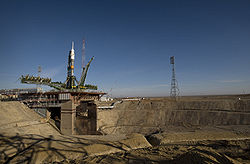 A Soyuz rocket is erected into position at the Baikonur Cosmodrome's Pad 1/5 (Gagarin's Start) on 24 March 2009. The rocket launched the crew of Expedition 19 and a spaceflight participant on 26 March 2009.[9]

Following the dissolution of the Soviet Union in 1991 the Russian space program continued to operate from Baikonur under the auspices of the Commonwealth of Independent States. On 8 June 2005 the Russian Federation Council ratified an agreement between Russia and Kazakhstan extending Russia’s rent term of the spaceport until 2050. The rent price — which is fixed at 115 million US dollars per year — is the source of a long-running dispute between the two countries.[10] As an attempt to reduce its dependency on Baikonur, Russia is planning on constructing the Vostochny Cosmodrome in Amur Oblast.[11]

Baikonur has been the only launch site for International Space Station missions utilizing Russian spacecraft.[4] Following the conclusion of the Space Shuttle program, Russian spacecraft are now the only means used by astronauts traveling to the International Space Station, making Baikonur the sole launch site used for manned missions to the ISS.[12]

Baikonur is fully equipped with facilities for launching both manned and unmanned spacecraft. It supports several generations of Russian spacecraft: Soyuz, Proton, Tsyklon, Dnepr, Zenit and Buran. During the temporary lapse of the United States' Space Shuttle program after the Columbia Disaster in 2003 it played an essential role in operating and resupplying of the International Space Station (ISS) with Soyuz and Progress spacecraft. Its high latitude of 46 N required the high orbital inclination of the ISS.

Downrange from the launchpad, spent launch equipment is dropped directly on the ground where it is salvaged by the workers and the local population.[13]

Soyuz TMA-16 launch vehicle being transported to launchpad at Baikonur.

All Baikonur's logistics are based on its own intra-site 1520 mm gauge railway network, which is the largest industrial railway on the planet. The railway is used for all stages of launch preparation, and all spacecraft are transported to the launchpads by the special Schnabel cars. Once part of the Soviet Railroad Troops, the Baikonur Railway is now served by a dedicated civilian state company. There are several rail links connecting the Baikonur Railway to the public railway of Kazakhstan and the rest of the world.

Baikonur Cosmodrome has two on-site multi-purpose airports, serving both the personnel transportation needs and the logistics of space launches (including the delivery of the spacecraft by airplanes). The Buran orbiter was transported to Baikonur on the back of the Antonov An-225 cargo aircraft. There are scheduled passenger services from Moscow to the smaller "Krayniy" (UAOL) airport which however are not accessible for lay public.

Although Baikonur has always been known around the world as the launch site of Soviet and Russian space missions, from its outset in 1955 and until the collapse of the USSR in 1991, the primary purpose of this center was to test liquid-fueled ballistic missiles. The official (and secret) name of the center was State Test Range No. 5 or 5 GIK. It remained under control of the Soviet and Russian Ministry of Defense until the second half of the 1990s, when the Russian civilian space agency and its industrial contractors started taking over individual facilities.[citation needed]

In 2006, the head of Roskosmos, Anatoly Perminov said the last Russian military personnel would be removed from the Baikonur facility by 2007. However, on 22 October 2008 an SS-19 Stiletto missile was test fired from Baikonur, indicating this may not be the case.[14]

On 22 December 2004, Kazakhstan and Russia signed a contract establishing the "Russia-Kazakhstan Baiterek JV" joint venture, in which each country holds a 50-percent stake. The goal of the project is the construction of the Bayterek ("poplar tree") space launch complex, to facilitate operations of the Russian Angara rocket launcher.[15] This will allow launches with a payload of 26 tons to low earth orbit, compared to 20 tons using the Proton system. An additional benefit will be that the Angara uses kerosene as fuel and oxygen as the oxidiser, which is less hazardous to the environment than the toxic fuels used by older boosters. The total expenditure on the Kazakh side will be $223 million over 19 years.[16] As of 2010, the project is stalling due to insufficient funding. It is thought that the project still has good chances to succeed because it will allow both parties – Russia and Kazakhstan – to continue the joint use of Baikonur even after the Vostochny Cosmodrome is commissioned.[17]

Baikonur Cosmodrome has a small museum, located right next to two small cottages, once residences of Sergey Korolev and Yuri Gagarin. Both cottages are part of the museum complex and have been preserved. The museum is home to a collection of space artifacts. A restored artifact from the Soviet Buran programme, possibly the Buran shuttle that was tested and orbited on a single unmanned spaceflight, sits right next to the museum entrance. (Another, similar looking artifact was destroyed in a hangar collapse in 2002;[18][19][20] which artifact, if either, actually flew into space, and which is a model, prototype, or test bed is disputed.) It has been restored and hosts an interactive presentation for visitors.

The museum also houses photographs related to the cosmodrome history, including images of all cosmonauts. Every crew of every expedition launched from Baikonur leaves behind a signed crew photograph that is displayed behind the glass.

Baikonur’s museum holds many objects related to Gagarin, including the ground control panel from his flight, his uniforms, and soil from his landing site, preserved in a silver container. One of the museum rooms also holds an older version of Soyuz descent capsule.