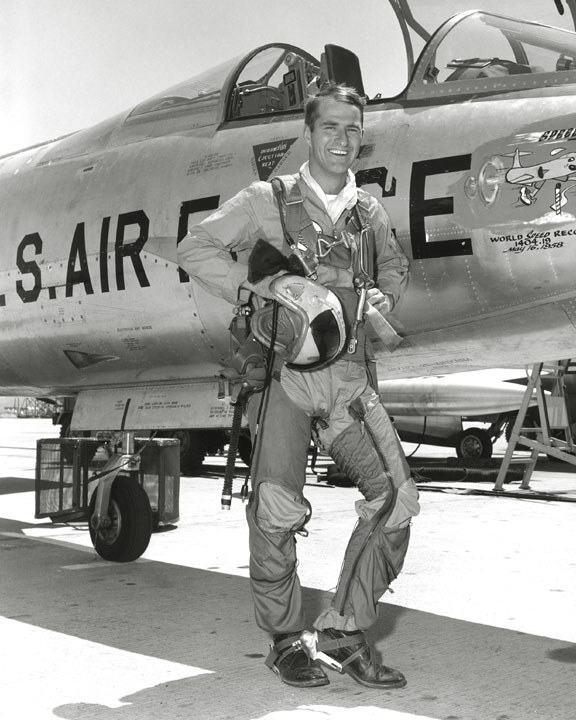 FRIDAY, 16 August 2002
Today the aviation world lost to leukemia, Louis Schalk, one of its pioneers. Wishing Lou bon voyage on this his final flight, Roadrunners Internationale highlites his noted achievements in remembrance of one of its premier members.

Graduated U.S. Military Academy at West Point in 1948 and Commissioned in the U.S. Air Force.

Graduated from Pilot Training and received his wings at Nellis AFB, NV.

Assigned to the 86th Fighter Bomber Wing in Germany.

Returned to Craig AFB, AL where he graduated from Flight Instructors School.

Graduated 1st in his class at the USAF Experimental Test Pilot School, Edwards AFB, CA in 1954 and assigned to Fighter Operations. His superiors included Pete Everest and Chuck Yeager. For 3 years he tested a variety of high performance aircraft including the F-100, F-101 and F-104.

In June of 1957 Schalk joined Lockheed Aircraft as an Engineering Test Pilot. In 1959 he was selected as Kelly Johnson's Chief Test Pilot for Lockheed's highly classified Advanced Development Program known as the "Skunk Works." He designed the cockpit and interfaced with system engineers on the refinements of the revolutionary high speed, high altitude A-12, YF-12 and SR-71 "Blackbirds."

On April 26, 1962 Lou Schalk made aviation history when he became the first to fly the A-12 Blackbird. He continued with many additional A-12 flights at Groom Lake, Nevada, under the watchful eye of the CIA run USAF supported program. He made the first four flights exceeding mach 3.0 with a top speed 2,287 mph above 90,000 feet.

Louis Schalk flew over 70 different aircraft and has over 5,000 hours of flight time.

In 1999 Lou was an honoree of the Lancaster, CA "Aerospace Walk of Honor." This prestigious award recognizes the outstanding contributions of experimental test pilots to the aerospace industry. Other outstanding honorees include Gen. "Jimmy" Doolittle, Col. "Pete" Knight, Brig. Gen. "Chuck" Yeager and Astronaut Neil Armstrong.

As an Air Force pilot Lou was trained to fire cannons and drop bombs. In reality he became a Cold War Warrior through his heroic exploits as a pioneering test pilot. He willingly faced the dangerous task of experimental flying that put him in harms way every time he climbed into the cockpit of the Blackbird. His aeronautical accomplishments tested the confines of space as he set new speed and altitude records. He rewrote aviation history and paved the way for a renewed national reconnaissance effort after the capture of Francis Gary Powers when his U-2 was shot down over Russia on May 1, 1960.

In the extremely hazardous world of test pilots, Lou's Schalk's achievements reflected directly on the success of the A-12 and SR-71 operational missions that followed. His efforts help perfect the photo and electronic intelligence collected by the Blackbirds.

If you asked former CIA pilot Frank Murray how important Lou's early testing of the Blackbird was, he would tell you about a White House directed mission he flew out of Kadena Air Base, Okinawa in 1968. The A-12 performed flawlessly and Frank's mission provided President Johnson and staff with photos of the USS Pueblo, a U.S. Navy vessel under attack off the coast of North Korea. This is but one example of the importance of timely intelligence provided Presidents Eisenhower, Kennedy and Johnson that impacted our Nation as well as the world political scene.

On April 27, 2002 over 1400 visitors attended the Blackbird Airpark 40th Anniversary celebration of Lou's First Flight. As always, in his own quiet way, he was there autographing posters and talking to aviation enthusiasts. None of us knew he was suffering from leukemia.

Lou Schalk, former chief test pilot for Lockheed Advanced Development Corporation (now Lockheed Martin Skunk Works), worked in secrecy on the development and test flying of the Blackbird airplane. The project was a top-secret CIA reconnaissance program and until recently much about this plane and its development was classified. Naturally some is still hidden in
secrecy. Lou Schalk was one of the very few who worked with C. L. "Kelly" Johnson and the Lockheed Skunk Works team, in the middle of the Cold War, developing the Blackbird, STILL flying more than 35 years later!!

Lou Schalk graduated from West Point in 1948 and was commissioned in the Air Force. After completing flying school at Nellis AFB in September 1949, he was assigned to the 86th Fighter Bomber Wing in Germany. His duties brought him back to the United States for studies at the Pilot Instructor School at Craig AFB and nine months of instructing at Laredo AFB before enrolling at the USAF Test Pilot School at Edwards AFB.

Graduating FIRST in his class at Test Pilot School, Lou was assigned to fighter operations at Edwards, where his instructors were Pete Everest and Chuck Yeager. Initially he completed the Instructor's Gunnery Course at Nellis and was assigned to various test programs.

Lou Schalk designed the cockpit and interfaced with the systems engineers on the A-12, YF-12 and SR-71 Blackbird prior to making the first thirteen flights on the A-12, which commenced on April 26, 1962.

Continuing in the Blackbird program, he made the first four flights exceeding Mach 3.0 with a top speed of Mach 3.287 (2,287 mph) and subsequent flights above Mach 3.0 as the inlet, engine, and afterburner were fine-tuned for maximum efficiency. This testing was done at altitudes sometimes exceeding 90,000 feet.

Lou left Lockheed's flight test program and test flying in June 1964 to accept a position with North American Aeronautics, where he remained for ten years before resigning to devote full time to the field of real estate. In his career, he has flown 70 different aircraft, compiling 5,000 hours in ten years of engineering flight test.


On 31 May 2003 Lou Schalk was inducted into the Iowa Aviation Hall of Fame. Louis Schalk accepted the award in behalf of her late husband.