Lockheed A-12 - Wikipedia, the free encyclopedia

From Wikipedia, the free encyclopedia
Jump to: navigation, search
Not to be confused with McDonnell Douglas A-12 Avenger II.

The Lockheed A-12 was a reconnaissance aircraft built for the Central Intelligence Agency (CIA) by Lockheed's famed Skunk Works, based on the designs of Clarence "Kelly" Johnson. The A-12 was produced from 1962 to 1964, and was in operation from 1963 until 1968. The single-seat design, which first flew in April 1962, was the precursor to both the twin-seat U.S. Air Force YF-12 prototype interceptor and the famous SR-71 Blackbird reconnaissance aircraft. The aircraft's final mission was flown in May 1968, and the program and aircraft retired in June of that year. The A-12 program was officially revealed in the mid-1990s.[1]

With the failure of the CIA's Project Rainbow to reduce the radar cross section of the U-2, preliminary work began inside Lockheed in late 1957 to develop a follow-on aircraft to overfly the Soviet Union. Under Project Gusto the designs were nicknamed "Archangel", after the U-2 program, which had been known as "Angel". As the aircraft designs evolved and configuration changes occurred, the internal Lockheed designation changed from Archangel-1 to Archangel-2, and so on. These nicknames for the evolving designs soon simply became known as "A-1", "A-2", etc.[2] 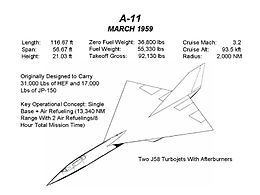 These designs had reached the A-11 stage when the program was reviewed. The A-11 was competing against a Convair proposal called Kingfish, of roughly similar performance. However, the Kingfish included a number of features that greatly reduced its radar cross section, which was seen as favorable to the board. Lockheed responded with a simple update of the A-11, adding twin canted fins instead of a single right-angle one, and adding a number of areas of non-metallic materials. This became the A-12 design. On 26 January 1960, the CIA ordered 12 A-12 aircraft.[3] After selection by the CIA, further design and production of the A-12 took place under the code-name Oxcart. 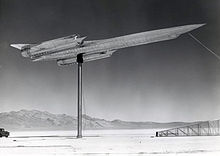 A-12 during radar testing at Area 51 – mounted inverted.

After development and production at the Skunk Works, in Burbank, California, the first A-12 was transferred to Groom Lake test facility.[4] On 25 April 1962 it was taken on its first (unofficial and unannounced) flight with Lockheed test pilot Louis Schalk at the controls.[5] The first official flight later took place on 30 April and subsequent supersonic flight on 4 May 1962, reaching speeds of Mach 1.1 at 40,000 feet.[6]

The reaction to the crash illustrated the secrecy and importance of the project. The CIA called the aircraft a Republic F-105 Thunderchief as a cover story;[10] local law enforcement and a passing family were warned with "dire consequences" to keep quiet about the crash.[8] Each was also paid $25,000 in cash to do so; the project often used such cash payments to avoid outside inquiries into its operations.[8] The project received ample funding; contracted security guards were paid $1,000 monthly with free housing on base, and chefs from Las Vegas were available 24 hours a day for steak, Maine lobster, or other requests.[8]

In June 1964, the last A-12 was delivered to Groom Lake,[11] from where the fleet made a total of 2,850 test flights.[10] A total of 18 aircraft were built through the program's production run. Of these, 13 were A-12s, three were prototype YF-12A interceptors for the U.S. Air Force (not funded under the OXCART program), and two were M-21 reconnaissance drone carriers. One of the 13 A-12s was a dedicated trainer aircraft with a second seat, located behind the pilot and raised to permit the Instructor Pilot to see forward. The A-12 trainer "Titanium Goose", retained the J75 powerplants for its entire service life.[12] 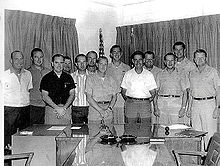 Although originally designed to succeed the U-2 in overflights over the Soviet Union and Cuba, the A-12 was never used for either role. After a U-2 was shot down in May 1960, the Soviet Union was considered too dangerous to overfly except in an emergency (and overflights were no longer necessary[13] due to reconnaissance satellites) and, although crews trained for the role of flying over Cuba, U-2s continued to be adequate there.[14]

The Director of the CIA decided to deploy some A-12s to Asia. The first A-12 arrived at Kadena Air Base on Okinawa on 22 May 1967. With the arrival of two more aircraft on 24 May, and 27 May this unit was declared to be operational on 30 May, and it began Operation Black Shield on 31 May.[15] Mel Vojvodich flew the first Black Shield operation, over North Vietnam, photographing surface-to-air missile (SAM) sites, flying at 80,000 ft (24,000 m), and at about Mach 3.1. During 1967 from the Kadena Air Base, the A-12s carried out 22 sorties in support of the War in Vietnam. Then during 1968, Black Shield conducted operations in Vietnam and it also carried out sorties during the Pueblo Crisis with North Korea.[citation needed] 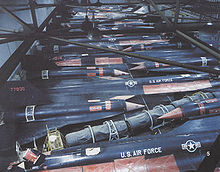 Head-on view of an A-12 on the deck of the Intrepid Sea-Air-Space Museum, illustrating the chines

Ronald L. Layton flew the 29th and final A-12 mission on 8 May 1968, over North Korea. On 4 June 1968, just 2½ weeks before the retirement of the entire A-12 fleet, an A-12 out of Kadena, piloted by Jack Weeks, was lost over the Pacific Ocean near the Philippines while conducting a functional check flight after the replacement of one of its engines.[17][18] Frank Murray made the final A-12 flight on 21 June 1968, to Palmdale, California storage facility.[19]

The deployed A-12s and the eight non-deployed aircraft were placed in storage at Palmdale. All surviving aircraft remained there for nearly 20 years before being sent to museums around the United States. On 20 January 2007, despite protests by Minnesota's legislature and volunteers who had maintained it in display condition, the A-12 preserved in Minneapolis, Minnesota, was dismantled to ship to CIA Headquarters to be displayed there.[22] 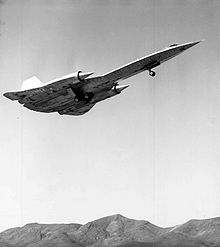 The following timeline describes the overlap of the development and operation of the A-12, and the evolution of its successor, the SR-71.

For the continuation of the Oxcart timeline, covering the duration of operational life for the SR-71, see SR-71 timeline.

The only two-seat trainer A-12 built was nicknamed "Titanium Goose". It is on display at the California Science Center.

The A-12 training variant (60-692 "Titanium Goose") was a two-seat model with two cockpits in tandem with the rear cockpit raised and slightly offset. In case of emergency, the trainer was designed to allow the flight instructor to take control.[citation needed]

The YF-12 program was a limited production variant of the A-12. Lockheed convinced the U.S. Air Force that an aircraft based on the A-12 would provide a less costly alternative to the recently canceled North American Aviation XF-108, since much of the design and development work on the YF-12 had already been done and paid for. Thus, in 1960 the Air Force agreed to take the seventh through ninth slots on the A-12 production line and have them completed in the YF-12A interceptor configuration.[24] 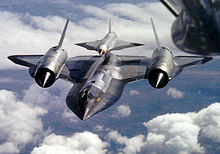 The M-21 variant carried and launched the Lockheed D-21, an unmanned, faster and higher-flying reconnaissance drone. The M-21 had a pylon on its back for mounting the drone and a second cockpit for a Launch Control Operator/Officer (LCO) in the place of the A-12's Q bay.[25] The D-21 was autonomous; after launch, it would fly over the target, travel to a predetermined rendezvous point, eject its data package, and self-destruct. A C-130 Hercules would catch the package in midair.[26]

The M-21 program was canceled in 1966 after a drone collided with the mother ship at launch. The crew ejected safely, but the LCO drowned when he landed in the ocean and his flight suit filled with water.[27] The D-21 lived on in the form of a B-model launched from a pylon under the wing of the B-52 bomber. The D-21B performed operational missions over China from 1969 to 1971.[28]

A-12 aircraft production and disposition[edit]