From Wikipedia, the free encyclopedia
Jump to: navigation, search
For the book and documentary about American servicepeople returning from Iraq and Afghanistan in the 2000s, see Operation Homecoming (book) and Operation Homecoming: Writing the Wartime Experience. 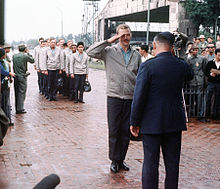 Hanoi Taxi, used in Operation Homecoming, flying over the National Museum of the United States Air Force in December 2005

Operation Homecoming was a series of diplomatic negotiations that in January 1973 made possible the return of 591 American prisoners of war held by North Vietnam. On Feb. 12, 1973, three C-141 transports flew to Hanoi, North Vietnam, and one C-9A aircraft was sent to Saigon, South Vietnam to pick up released prisoners of war. The first flight of 40 U.S. prisoners of war left Hanoi in a C-141A, later known as the "Hanoi Taxi" and now in a museum. From February 12 to April 4, there were 54 C-141 missions flying out of Hanoi, bringing the former POWs home.[1]

Each plane brought back 40 POWs. During the early part of Operation Homecoming, groups of POWs released were selected on the basis of longest length of time in prison. The first group had spent 6-8 years as prisoners of war.[2]

After Operation Homecoming, the U.S. still listed about 1,350 Americans as prisoners of war or missing in action and sought the return of roughly 1,200 Americans reported killed in action and body not recovered.[3] These missing personnel would become the subject of the Vietnam War POW/MIA issue.

The Army, Navy, Air Force and Marines each had liaison officers dedicated to prepare for the return of American POWs well in advance of their actual return. These liaison officers worked behind the scenes traveling around the United States assuring the returnees well being. They also were responsible for debriefing POWs to discern relevant intelligence about MIAs and to discern the existence of war crimes committed against them.[4][5]