From Wikipedia, the free encyclopedia
Jump to: navigation, search
This article is about the supersonic Su-15 "Flagon". For the earlier subsonic interceptor, see Sukhoi Su-15 (1949).

The aircraft is most famous for being involved in the downing of Korean Air Flight 007.

Recognizing the limitations of the earlier Su-9 and Su-11 in intercepting the then-new Boeing B-52 Stratofortress, particular in terms of radar and aircraft performance, the Sukhoi OKB quickly began the development of a heavily revised and more capable aircraft. A variety of development aircraft evolved, including the T-49, which shared the fuselage of the Su-9 (including its single engine), but used cheek-mounted intakes to leave the nose clear for a large radome for the RP-22 Oryol-D ("Eagle") radar(NATO "Skip Spin"), and the T-5, essentially a heavily modified Su-11 with a widened rear fuselage containing two Tumansky R-11 engines.

These led to the T-58, which combined the twin engines with a modified version of the T-49's nose, but with side inlets further back, behind the cockpit. It was approved for production on 5 February 1962, as the Su-15, and the prototype first flew on 30 May 1962. It entered service testing 5 August 1963, but its service entry was delayed by political infighting with the Yakovlev OKB over production line capacity in Novosibirsk, which was also building the Yak-28P. The Su-15 proved to be superior in most respects other than range, and it was officially commissioned on 3 April 1965. Series production began the following year, and it entered service with the PVO in 1967, replacing Su-9s, Su-11s, and Yakovlev Yak-25s. The initial Su-15 received the NATO reporting name "Flagon-A". A simplified trainer version, the Su-15UT (NATO "Flagon-C"), with no radar or combat capability, entered service in 1970.

Initial delta-winged Su-15s had poor take-off and landing characteristics, and so Sukhoi investigated a new wing design with extended wingtips (increasing wing area) and boundary layer control. Su-15s with the new wing went into production in 1969. They were dubbed "Flagon-D" by NATO, although the Soviet designation was unchanged.

Also in 1969 testing began of the upgraded Su-15T with the Volkov[disambiguation needed] Taifun ("Typhoon") radar, which was based on the MiG-25's powerful RP-25 Smerch-A ("Tornado") radar (NATO "Foxfire"). The Taifun proved troublesome, however, and ceased production after only 10 aircraft had been built. It was followed in December 1971 by the Su-15TM (NATO "Flagon-E"), with the improved Taifun-M radar (NATO "Twin Scan") and provision for UPK-23-250 gun pod or R-60 (AA-8 "Aphid") short-range air-to-air missiles. Aerodynamic demands forced a redesign of the radome with an ogival shape, earning a new NATO reporting name, "Flagon-F", although again the Soviet designation did not change. A comparable combat-capable trainer, the Su-15UM (NATO "Flagon-G"), followed from 1976. The final Su-15UMs, the last Su-15s produced, came off the line in 1979.

Various OKB proposals for upgraded Su-15s with better engines and aerodynamics to satisfy a VVS requirement for a long-range tactical fighter were rejected in favor of the Mikoyan MiG-23 fighter. 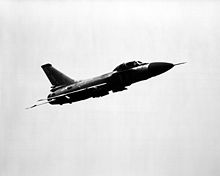 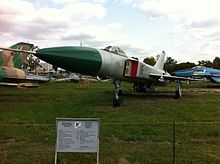 at the Aviation museum of Zhulyany Airport, Kiev, Ukraine

Although many components of the Su-15 were similar or identical to the previous Su-9 and Su-11 (NATO reporting name "Fishpot"), including Sukhoi's characteristic rear-fuselage airbrakes, the Su-15 abandoned the shock-cone nose intake for side-mounted intakes feeding two powerful turbojet engines, initially the Tumansky R-11F2S-300. The change allowed room in the nose for a powerful search radar, initially the RP-22 Oryol-D (NATO 'Skip Spin'). The early Su-15 ("Flagon-A") had pure delta wings like its predecessors, but these were replaced from the 11th production series onward by a new 'kinked' delta planform of increased span and area, with a small wing fence above each outer pylon and blown flaps to improve landing characteristics. This was accompanied by a new tail of greater anhedral and a vertical fin of reduced height.

The Su-15 had maximum speed of Mach 2.5 and a rate of climb of 228 m/s. Take-off and landing speeds were comparatively high, with a take-off speed of 247 mph (395 km/h) for early delta-winged 'Flagon-A's and 231 mph (370 km/h) for the larger-winged 'Flagon-F.' While the controls were responsive and precise, the aircraft was unforgiving of pilot error.

Despite its powerful radar, the Su-15, like most Soviet interceptors before the late 1980s, was heavily dependent on ground control interception (GCI), with aircraft vectored onto targets by ground radar stations. It was fitted with the Lazur-S datalink system, which transmitted instructions to the pilot to accomplish the interception. The later Su-15TM had a Vozdukh-1M datalink and SAU-58 (sistema automaticheskogo upravleniya, automatic control system) capable of carrying out completely automatic, 'hands-off' interceptions until the last moments of the interception.

Primary armament of the Su-15 was the R-8/K-8 (AA-3 "Anab"; later R-98) air-to-air missile. Early models carried two missiles, but 'Flagon-D' and later versions could carry four. Like most Soviet missiles, the R-98 was made in both infrared and semi-active radar homing versions, and standard practice was to fire the weapons in pairs (one semi-active radar homing, one IR homing) to give the greatest chance of a successful hit. The IR homing missile was normally fired first in order to prevent the possibility of the IR missile locking on to the radar homing missile. Later 'Flagon-F' models often carried two R-98s and one or two pairs of short-range R-60 (AA-8 'Aphid') missiles. Late-model 'Flagons' also sometimes carried a pair of UPK-23-250 23 mm gun pods on the fuselage pylons, each containing a two-barrel GSh-23L cannon.

The Su-15 formed a significant part of the V-PVO's interceptor force, and was designed to intercept easier targets such as the American B-52 and U-2, and the British V bombers, leaving the more difficult targets such as the XB-70 and B-58 to the faster MiG-25P. The Taifun radar of the Su-15TM was optimised for counter-countermeasure operation, as opposed to range. As an interceptor, the task of the Su-15TM was to fly under autopilot, using GCI commands sent through the datalink. The radar would only be turned on as the interceptor approached the target in order to provide targeting parameters for the radar homing K-8/R-8/R-98 missiles, the high power of the radar allowing it to 'burn through' enemy ECM signals. If all else failed, IR homing versions of the K-8 would provide a last opportunity to shoot down the intruder, along with any gun pods the Su-15 might be carrying.

The Su-15 was optimised for the high-altitude interception role with its fast climb-rate and high speed at high altitude but lacked look-down/shoot-down capability, even with the Su-15TM's more sophisticated Taifun radar. This eventually led to the MiG-23P, which did have look-down/shoot-down capability, becoming the preferred asset of the V-PVO, especially once NATO switched to low-level penetration tactics. Even so, the Su-15 remained an important part of the V-PVO until the fall of the Soviet Union.

As one of the V-PVO's principal interceptors, the Su-15 was involved in several incidents with foreign aircraft intruding into Soviet airspace:

The Su-15 was also credited with shooting down five reconnaissance balloons sent to spy on Soviet territory in 1975.

Tragically, a close supersonic fly-by of Yuri Gagarin's MiG-15 by an SU-15 led to Gagarin's death in 1968. Computer models show that the SU-15 passed "within meters" of the MiG.[2]

Although it was produced in large numbers (1,290 of all types), the Su-15, like other highly sensitive Soviet aircraft, was never exported to the Warsaw Pact or any other country due to its sophisticated systems. Some Su-15 were reported to be deployed in Egypt in 1972 but were used with Soviet crews. At one point, the Su-15 was considered as a strike fighter, but proved to be too specialised as an interceptor to be used in that role.

After the fall of the Soviet Union, the Su-15 was abruptly retired from the new Russian Air Force in 1993 to comply with the Treaty on Conventional Armed Forces in Europe. Most were hastily scrapped in favour of more advanced interceptors, including the Su-27 and MiG-31, but some are in reserve storage for emergency use. In Ukraine, the last Su-15s (at Kramatorsk and Belbek) were withdrawn from use in 1996.

Some Western reports indicate that the Su-15TM was also designated Su-21 and the Su-15UM Su-21U. These reports are apparently incorrect. Designation Su-21 was reserved for Su-17M4 but never used.[3] 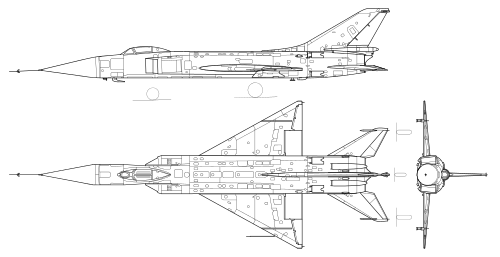