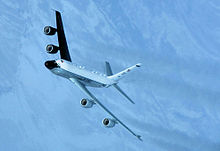 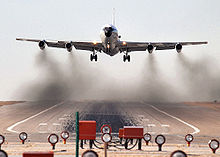 The 55th Wing (55 WG) is a United States Air Force unit assigned to Air Combat Command. The wing is primarily stationed at Offutt Air Force Base, Nebraska, but maintains one of its groups and associated squadrons at Davis-Monthan Air Force Base, Arizona as a geographically separated unit (GSU).

The 55 WG is the only Air Force wing with continuous operations, maintenance, and aircraft presence in the United States Central Command area of responsibility since Operation Desert Storm.[1]

The 55 WG mission is to provide worldwide reconnaissance, real-time intelligence, command and control, information warfare and combat support to U.S. leaders and commanders. One of the wing's units, the 55th Operations Group, operates 46 aircraft, including 13 models of seven different types. It is the largest wing in Air Combat Command and flies the most diverse number of aircraft.

The "Fightin’ Fifty-Fifth" has made significant contributions to the defense of the United States of America for more than 50 years. Having won honor and distinction for its combat record since World War II with two Distinguished Unit Citations, the wing has since compiled an admirable record of achievements. Since its inception, the unit has operated around the world, flying a wide variety of aircraft.

Emblem of the 55th SRW

The 55 SRW moved to Offutt AFB, Nebraska, in August 1966. That same year the 55th’s 38th Strategic Reconnaissance Squadron assumed responsibility for SAC’s airborne command and control system. The 2d Airborne Command and Control Squadron inherited this mission after activation on April 1, 1970. The 1st Airborne Command and Control Squadron, flying E-4A aircraft, transferred to the 55th on November 1, 1975, bringing with it the National Emergency Airborne Command Post, now called the National Airborne Operations Center. The Wing flew reconnaissance operations during the U.S. military operations in Grenada in 1983 and Libya in 1986. On March 1, 1986, the 55 SRW became the host unit at Offutt after the inactivation of the 3902d Air Base Wing.

The wing deployed to the Persian Gulf on August 8, 1990, and began 24-hour-a-day reconnaissance of the region for Central Command Commander Gen. Norman Schwarzkopf, under Operation DESERT SHIELD. At the start of Operation DESERT STORM, January 18, 1991, the wing continued to provide real-time information to theater commanders and remains there yet today.

The 55th Strategic Reconnaissance Wing became the 55th Wing on September 1, 1991, to reflect the wing’s performance of a diversity of missions. When SAC disestablished and Air Combat Command (ACC) established, the wing transferred to ACC and gained its fifth operational location.

The 55th SRW and the 55th Wing has been awarded the USAF's P. T. Cullen Award five times since 1971 for its contributions to photo and signal intelligence collection.