When you finish this page, if you would like more information about Rivet Ball and the companion plane, Rivet Amber (lost in June 1969) and the men who flew on them, you can use this link to a site by King Hawes -- use your Browser's BACK button to return to this page.

The Alaskan Ring of Fire Charter

There is a tall radio antenna to the right side of the final approach at the last destination -- did anyone notice it, or were you distracted? I'll leave it at that 'cause I don't want to spoil the fun. Good work Bob.

Real life in the Aleutian Islands

Here's a bit about the actual flying I did out in the Aleutians. We flew an RC-135S (Rivet Ball) aircraft from Eareckson Air Station (AS). Back in the late 1960s, it was called Shemya AS. I've included a few pictures from the island and a couple of screen shots from the charter flight.

A bit about the runway at Shemya. There was a single 10,000 feet runway (28 / 10). At the west end of the runway, there was about ten feet of dirt "overrun" before reaching a 45 foot cliff. Extending out on the runway centerline was a twin row of telephone poles -- holding the runway approach lights for a landing on Rwy 10.

The weather at Shemya was generally miserable. I've seen 25 knot winds and zero visibility in fog for more than a half hour. So, you say, you can't have fog with that much wind -- you can if the clouds are on the deck and the cloud bank is large enough. I'll say one good thing about the weather. The accident review board was delayed arriving at the island for a week due to winds and weather. The day they arrived, as they stood on the ramp, the weather went from CAVU (clear and visibility unlimited) to zero-zero conditions in blowing snow and then back to CAVU -- all in thirty minutes.

The night of the accident, I was flying a GCA (Ground Controlled Approach, precision radar) approach to Rwy 28. The reported Runway Condition Reading was RCR-09IR-P. The IR stood for icy runway and the P indicated patchy, but the 09 reading was well within our safety margins for landing. What they didn't tell me was that they had sprayed isopropyl alcohol on the ice. That turned the ice to slush and I hydroplaned off the end of the runway and over the cliff. After the crash, the RCR was confirmed as less that 04 and that would have sent us to our diversion base (Eielson AFB, Alaska).

The nose steering was totally useless. The anti skid system worked like a charm -- only one trouble -- the tires were not in contact with the runway surface. I managed to "steer" the airplane using ailerons to "bicycle" us toward the right edge of the runway and avoid those telephone poles.

The airplane was a virtual total loss. They salvaged one of the four jet engines, part of the tail section and about 60,000 pounds of electronic gear from the interior. Staff operational errors and weather were listed as the causes of the accident. No responsibility was assigned to any crew member. 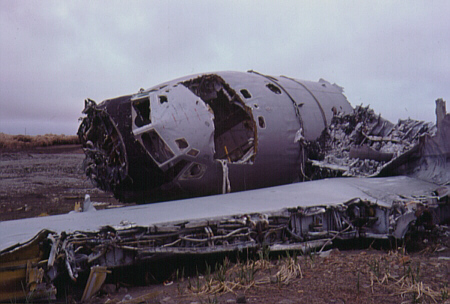 Return to The top this document